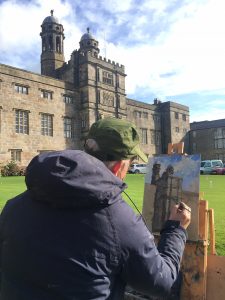 Peter Brown paints directly from life, be it in his home town of Bath, or further afield, earning him the nickname ‘Pete the Street’.

Peter was born in 1967. He studied in Bath and then Manchester where he remained for a further two years.

Returning to Bath in 1993, inspired by the architecture and life of the town, he started to draw in charcoal moving back to working in oils three years later.

He paints a great deal across the UK – its cities, landscapes and coastline and in particular London.

However, discovering new places has become more and more important and his painting has taken him to India, Vietnam, Havana, USA and across Europe. He rarely paints from reference in the studio preferring to work directly from the subject on site in sometimes the foulest of weathers doing what he calls ‘see and put’.

Recently however, Peter has become more interested in interiors – of his home in Bath and elsewhere. Working in charcoal, oil paint and pastel, he has received numerous awards at various national exhibitions.

Peter works for one-man exhibitions each year, either in London or Bath, and has been showing with Messums London since 2004. He is President of the New English Art Club, a society founded in 1885 by a group of artists dissatisfied with the entrenched attitudes of the Royal Academy. Their early exhibitions including paintings by Clausen, Sickert and Stanhope Forbes and in later years through 20th-century artists such as Stanley Spencer, Paul Nash and C. R. W. Nevinson.

Peter lives in Bath with his wife Lisa and their five children: Ollie, Toby, Hattie, Ella and Ned.